Ivor Novello was such a proto-goth heartthrob. Like, throw a blazer on him and muss his hair up and he’d be ready to win the hearts of sensitive girls with very active tumblr accounts.1 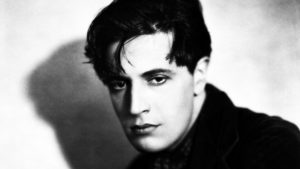 But he’s actually got this really interesting history that I didn’t know much about. I know way more about Noël Coward. I’m not sure why I never pursued this before.

Also…my god I want to see this movie, The Man Without Desire:

“18th-century Venetian Count Vittorio Dandolo (Novello) is devastated by the death of his lover Leonora (Nina Vanna) and loses all interest in life. Wishing to escape from his grief, he devises a method of putting himself in a state of suspended animation. He awakens 200 years later in 1920s Venice where he meets Genevia, Leonora’s double, who turns out to be a descendant of his former love. Falling immediately in love with Genevia, he proposes marriage which Genevia accepts. He then discovers that his 200-year slumber has left him with the ability to love but unable to experience passion, and the marriage remains unconsummated.” (Wikipedia)

What the hell? Must find this someday.