I think probably because it was mentioned on brainpickings,1 I’ve seen a few times and been thinking myself about this Saint-Exupéry quote:

Life has taught us that love does not consist in gazing at each other but in looking outward together in the same direction.

Looking at the context of this larger quote from Terre des hommes (which I have not read), I’m pretty sure that it did not originally apply to romantic love. I mean, it’s applicable, sure. And ideally romance is a kind of comradeship. But that doesn’t seem to be what is meant here. According to Wikiquote, the full quote is:

No man can draw a free breath who does not share with other men a common and disinterested ideal. Life has taught us that love does not consist in gazing at each other but in looking outward together in the same direction. There is no comradeship except through union in the same high effort. Even in our age of material well-being this must be so, else how should we explain the happiness we feel in sharing our last crust with others in the desert? No sociologist’s textbook can prevail against this fact. Every pilot who has flown to the rescue of a comrade in distress knows that all joys are vain in comparison with this one.

But, in any case, I do think it’s applicable to romantic love. Whether or not that’s the sense it was meant in. This is the problem with quotes.2 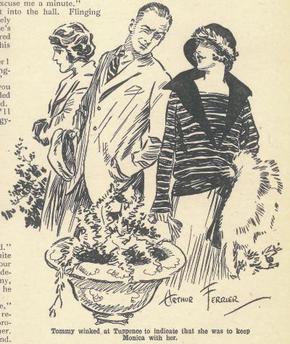 I’ve been thinking a lot about partners in crime recently. And this idea that communal work and outward focus are what make love, rather than the mutual obsession we so often see in YA, is really appealing. I think that’s what makes, for example, Tommy and Tuppence work so well. Or another favorite: Mulder and Scully. A really great example I read recently, in a book I only kind of liked,3 was Fidelma and Eadulf in the first Sister Fidelma book, Absolution By Murder. Crocodile on the Sandbank is another good one. Nick and Nora are actually far less collaborators in terms of crime solving, as much as I like those movies. Theirs is more a project of repartee than a project of outward focus.

With detective fiction, the external project  is so important that it overwhelms opportunities for mutual obsession. Characters basically notice, as a side thought, that they’ve fallen in love well after it’s already happened. That’s the way I think it should be.

I find this really appealing as a model for telling stories with a strong and well-grounded romantic connection, especially for YA.4 It’s really easy to just wind up a reader with details about mutual obsession, about “will they or won’t they.” The great thing about partners in crime is, they often don’t care. They’re so interested in what they’re interest in, that watching them fall into step is incredibly satisfying. It’s the kind of partnership I think most people want to have. Or I’ve just committed the fallacy of believing everyone is like me. Either way, it’s something I hope to bring to my writing in the future.