I‘ve become a huge Letterboxd fan in the time that I’ve been using it. I know it would be disastrous for it to also include television, but with such a thin line between film and television these days1 I do wish I could give five stars to my favorite shows as well.2 The interface is lovely, the community is dorky and sweet…I just love it. I found someone on there with as rabid a love of another film star as I have for Paul Henreid. Can’t beat that.

I made sort of a fun movie list for The Museum of Us on there, which is one of the more fun things I’ve done for this book. One of the movies in that list is The Spanish Main, a film I demanded my library buy for my personal viewing pleasure because Paul Henreid plays a pirate and pretty much just wanders around with vague actor-ly motivation in a half-buttoned shirt. I’m sure it’s valuable in some sort of history of cinema sense, in which the corpus has value even if the constituent units are clearly awful, but I obviously just watched it because of Paul Henreid so why even pretend.

One of the reviews of this movie on Letterboxd that I saw this morning uses the term “derring-do,” which is definitely falling into the Baader-Meinhof category3 for me. I feel like, maybe given the amount of swashbuckling and knavery I’ve been reading lately, that I myself brought this term into my circle of focus. However, I finally saw it enough times this morning that I looked up the etymology, because knowing what a word means has nothing on knowing how it came to be. 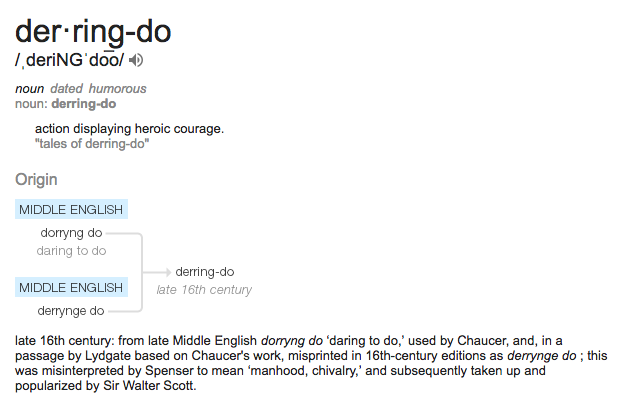 How cool is that? And I’m curious if you’d been creating folk etymologies for this one, how many people would have come up with this origin just out of pure instinct and luck. Because once you know, it does sound obvious.

In short: language is cool, that movie is good-bad, use letterboxd.