In poetry, enjambment1 is “the running-over of a sentence or phrase from one poetic line to the next, without terminal punctuation; the opposite of end-stopped.” Wikipedia gives this example from The Waste Land, in which only lines 4 and 7 are end-stopped:

In The Museum of Us, I used this kind of weird text-slide right in the first chapter. As in all things, there were a lot of reasons this feature was used in the book, most of which were intentional. I’ve always been really interested in visual poetry, and in the visual qualities of text in general. I also think that the effect of breaking up these images so they slide is really powerful, both in how it looks and in how it forces you to read, to connect the lines together. And it’s an effect that’s echoed later in the book, and I think that’s important as well.

But you know what was not intentional?

Those line breaks in the middle of each sentence. 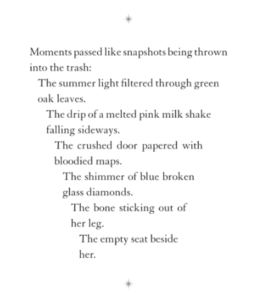 I am solely responsible for the lefthand shape of this poem, yes. But the righthand side is a happy result of text design, specifically of the width of an actual, physical page. The apparent enjambment and the secondary set of images produced by that enjambment (oak leaves, bloodied maps…) emerged as the text was actually made ready for print.

I’ve always kind of wondered how exactly that happened and how that decision was made. My guess is that it looked super weird one line after another because the first line was too long for a single line. And then, probably, they decided to go for symmetry. Once I saw how it looked and felt how it sounded,2 I loved it and wouldn’t want it any other way, but it’s curious: somewhere out there in the world is a smart text designer who has become my silent collaborator.

So, thank you, whoever you are. You’re a true poet.